The post This Is America #94: PG&E Firestorm, Rojava Solidarity in Seattle, Impeachment Crisis appeared first on It’s Going Down.

On this episode, we speak with an organizer from the bay area, about the history of PG&E, a private utility company linked to decades and decades of fires, pipeline explosions, and more – all caused by the corporations drive to put profits before the public. We also speak with folks involved in Rojava solidarity organizing in Seattle.

We then launch into a conversation on the continuing impeachment crisis, US intervention in Syria, and more.

All this and more, but first, let’s get to the news!

Mass demonstrations have continued in Haiti, with recent clashes resulting in at least two deaths after an armed attack took place against an anti-government protest following a rally by police who were demanding higher wages and health benefits. One person was shot in the attack, however the shooter was grabbed by the crowd and then set on fire. Protests have been raging for months, demanding that President Moise, backed by the United States, step down. According to a report by Al Jazeera:

An auditors’ court probing two billion dollars in aid from a Venezuelan oil fund found that companies run by Moise before he became president were “at the heart of an embezzling scheme.”

Currently, supporters of Moise are calling on Trump to intervene, which some have inferred to mean military aid.

Oct. 28, 2019 protests in #Haiti‘s capital against US/Trump backed govt of @moisejovenel. Protesters say they hate Clintons but aren’t stupid. Trump is in charge of the US embassy which most consider the real power in Haiti. They believe he is keeping the corrupt govt in power. pic.twitter.com/vUvnVG5Ugu

New documents obtained by The Intercept show that in the Trump era the FBI has continued to focus heavily on surveilling and infiltrating black liberation movements and organizations. According to the report:

Between 2015 and 2018, the FBI dedicated considerable time and resources to opening a series of “assessments” into the activities of individuals and groups it mostly labeled “black separatist extremists.” This designation was eventually folded into the category of “black identity extremism.” Earlier this year, following an onslaught of criticism from elected officials, civil liberties advocates, and even some law enforcement groups, the FBI claimed that it had abandoned the “black identity extremism” label, substituting it for a “racially motivated violent extremism.”

As The Intercept has reported, following the killing of Michael Brown by a police officer in Ferguson, Missouri, the FBI began spying on Ferguson activists and tracking their movements across states, warning local law enforcement partners that Islamic State group supporters were “urging” protesters to join their ranks. The FBI also drafted a mysterious “race paper,” the contents of which remain secret even though the bureau has disowned it. And as the Young Turks reported, the bureau has established a program dubbed “Iron Fist” targeting so-called black identity extremists with undercover agents.

“These documents suggest that since at least 2016, the FBI was engaged in a national intelligence collection effort to manufacture a so-called ‘Black Identity Extremist’ threat,” Nusrat Choudhury, deputy director of the ACLU Racial Justice Program, told The Intercept. “They are spending a lot of energy on this and they are clearly reaching out to other law enforcement.”

In other news, this week saw demonstrations organized across the US as part of a National Day of Outrage around the case of Atatiana Jefferson who was murdered in her home by a police officer conducting a wellness check. Protesters also gathered in Fresno, California to protest the killing of 16 year-old Isiah Murrietta-Golding, who was shot in the back and killed in 2017, while running from police; the video has just been released.

Black Morning! Yesterday was Powerful, as we took to our streets for a #DayOfOutOutrage We would like to thank everyone who came out to #ProtectOurSisters @AmericanU students Rise Up!#HandsOffGianna She was found Not Guilty of all charges @untilfreedom #WeKeepUsSafe #sayhername pic.twitter.com/v9tSKMt0cT

Protests against ICE remain widespread. In the last few days, anti-ICE demonstrations were organized in Minneapolis, demanding that ICE be removed from a building complex. On October 25th, cities across the country saw protests against Greyhound, decrying the companies practice of allowing ICE agents to board buses and attempt to capture undocumented people. Meanwhile, students at Penn State shut down a speaking event featuring the former director of ICE.

So a protest against ICE and Greyhound bus cooperating with them just walked by me pic.twitter.com/C3G9paL5FO

After four days, members of the Industrial Workers of the World (IWW) have ended a strike which shut down four stores of the fast food chain, Burgerville. The Burgerville Workers Union wrote on Facebook:

A four day, four store strike. We really did it. And today, we’re back to work–both at our stores, and at the bargaining table. Faced with our collective power, Burgerville is ready to actually negotiate with us over wages, and it feels like we have a real path forward towards a fair contract and a living wage.

We shut Burgerville down this week, over and over and over. We made sure they had barely any customers on Blazers opening night. Dining rooms at striking shops were closed almost the entire length of the strike. We faced down intimidation from Joey Gibson and Patriot Prayer, and just kept rolling with our week of action. This is what worker power and solidarity looks like.

Right now, it’s hard to fully comprehend what we did, you did, we ALL did this week. All we can say is thank you, from the bottom of our hearts.

On Vancouver Island in so-called British Columbia, people took to the streets in solidarity with the Tiny House Warriors, who were recently attacked by Canadian police for asserting Native sovereignty over their unceded lands where a pipeline is currently under construction. 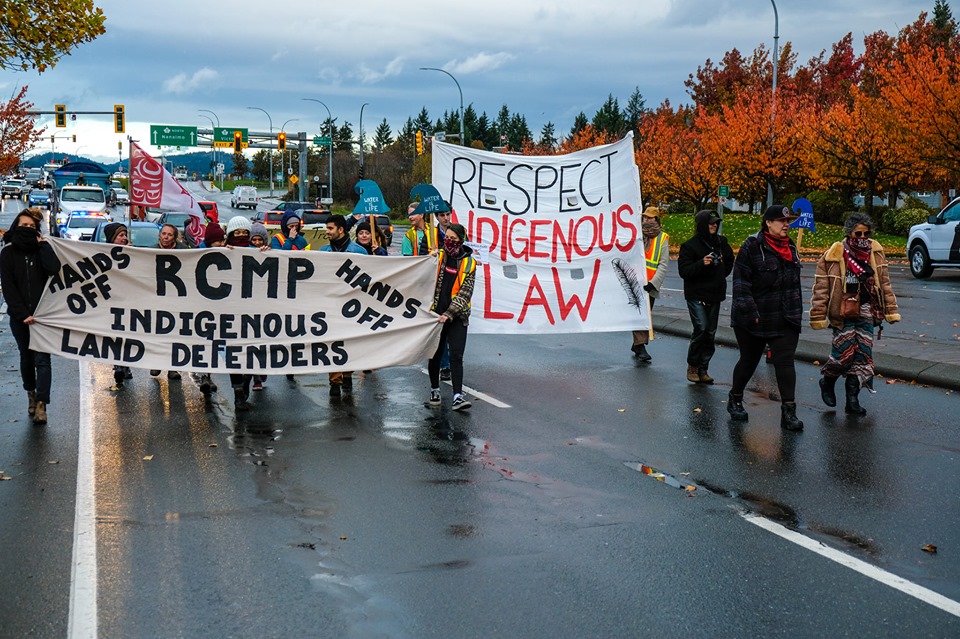 In Appalachia, miners who launched a nearly two month blockade of coal trains have now won over $5 million in back pay.

Finally, a new report from Unicorn Riot has exposed:

Gavin Sample is an instructive case study of how young white nationalists, radicalized online, are working quietly to inject their views into GOP politics.

According to his post’s online, Sample was also heavily involved in the pro-Trump group, Turning Point USA, which has been repeatedly linked to the Alt-Right and is heavily backed by the Trump administration and wealthy corporate donors.